Eating out in Japan 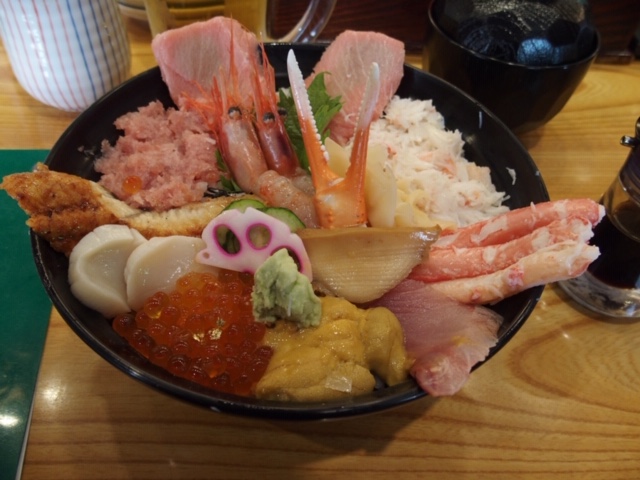 Jonathan’s travels in Japan have included sampling some of the country’s world-renowned cuisine, and indeed its dining culture in general. Here at BLL, we understand that when it comes to food presentation is key, and that extends to the Menu itself. Why not checkout some of the menu covers we have created, that do justice to the excellent food and surroundings of some very prestigious establishments.

In the meantime, we hope you enjoy Jonathan’s report on eating out in Japan.

There is a huge culture of eating out in Japan, and the Japanese are very particular about everything. Restaurants cater predominantly for Japanese clientele, and would not survive in a highly competitive market without being good.

So it would be unusual to have a bad meal in a restaurant in Japan. You might choose badly, and be disappointed, but the quality of food is universally excellent.

Finding a menu in English is relatively unusual once you get away from the main areas frequented by tourists. However, many restaurants have models of the various dishes outside, showing prices, and as a tourist your trip will mostly be in areas where you’ll find it perfectly manageable.

This also tends to lead to eating at relatively economical restaurants. The more expensive restaurants seem to not particularly want non-Japanese guests; we have even been turned away when a restaurant clearly had plenty of room, being told the restaurant was reservations only.

However, the choice of inexpensive restaurants is enormous, everywhere. Hotel restaurants are relatively expensive, although prices didn’t seem to be as high as we remember from previous trips.

There is no such thing as a “Japanese restaurant”, in the way we have them in Europe. Each restaurant specialises in a particular type of food, so if you want Ramen (noodles in a pork broth, with slices of roast pork – with an egg as an optional extra) you would go to a Ramen restaurant.

Sometimes it is even more specialised. The best sashimi we’ve ever had was at a small restaurant just outside the fish market in Kanazawa. Various choices – all types of mixed or one variety of raw fish served on a bowl of sushi rice.

That restaurant is a good example of how Japan is opening up to tourism. When we first visited three years ago, we found a large queue of people waiting to go in. We saw the pictures outside of the menu options and decided to join the queue.

We were rescued by a helpful Japanese, who showed us we had to put our name on a list at the front. Otherwise we’d have been waiting all day!

Recently we revisited the same restaurant. Signs in English explain everything, and the seating inside had changed.

Previously there was a small bar area, OK for westerners, and mostly tatami mats for Japanese to sit on the floor. Those tatami mats have now been replaced by tables and chairs, and quite a lot have been squeezed in.

Food, however, was just as good, and it was still mostly Japanese customers.

Most department stores and all shopping centres have restaurant areas, where there is a choice and most of them are very accessible to tourists. The food quality is the same as everywhere else, so we sometimes found this to be the easiest option.

Apart from restaurants, the Japanese seem to eat a lot of takeaway, including the famous bento boxes, which are perfect for lunch on a long train journey.

Basements in the large department stores will be a food hall, and very interesting to visit in themselves. There is a huge choice of takeaway food, although you probably won’t know what it all is!

About breakfasts: we don’t really want to spend the time having breakfast in the hotel, so we take granola (or buy some where we can) then buy fruit juice, yogurts and a banana the evening before and have breakfast in our room.

Every hotel we used had a fridge – not a minibar – just a fridge provided for guests to use, plus a kettle and tea/coffee, so it worked really well.

A confession: we love most types of Japanese food, and enjoyed it twice a day for 11 days. On day 12 we couldn’t face another Japanese meal, and found an Italian restaurant in a shopping centre. That too was excellent.

Finally, although we did eat well, we both lost weight. We weren’t trying to, so that was definitely a plus.